So Savage Worlds Adventure Edition has been released (at least to Kickstarter backers at time of writing) and the non-disclosure agreement lifted, means I'm free to talk about how SWADE will effect Frozen Skies. Stated previously that I'll be doing an Update & Errata PDF dubbed 'Black Ice', basically covering the changes to Frozen Skies that will be incorporated into the SWADE version. So this week we'll be taking a look at some of those changes and one or two new ideas. 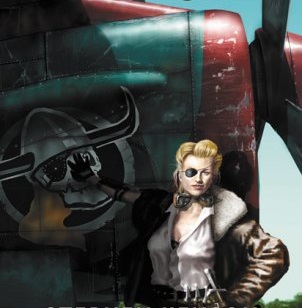 Least one Edge (Mechanic) has been dropped since the Mr Fix It Edge works mechanically the same with similar requirements.

Social Edges & Hindrances have been updated to work with the new Networking rules. Some work slightly different in SWADE than they did in SWD, likewise they've had the bonuses they provide brought inline with SWADE.

Ace Gunner is one of the Edges that have been completely changed; No longer does it provide a flat bonus to Shooting with vehicle mounted weapons, rather it now acts as a modifier for rolls on the Vehicle Critical Hit Table.

Pilot's Instincts is a new Edge and one that works by granting a bonus to your aircraft's Evasion score when you have an Action Card of 5 or less.

There will be some new modifications such as Armoured Cockpit which adds armor for Crew results on the Vehicle Critical Hit Table. I'm also toying with the idea of allowing extra spaces on an aircraft for modifications, but at the expense of reduced Handling.

Another new thing I'm looking at for aerial combat is different altitude levels, mainly for modifiers based on which altitude the aircraft is flying at and other factors. This could potentially effect aircraft modifications.

Though an extension of the aircraft rules for Frozen Skies, it deserves its own mention.

I've already posted on social media that it will be based on the new chase rules for SWADE, though expand upon what those rules a little bit. The new chase rules use a second deck of cards to determine the chase, ranging from relative distance between those involved and complications. Though the value of the cards are normally only use to determine complications when they come up, I'm thinking of extending that to provide modifiers to both Piloting and Shooting rules regardless of whether there is a complication or not. My thought was that the cards themselves would represent the actual course of the race.