With a new edition of Savage Worlds on the horizon, I've been going through and updating Frozen Skies to reflect the new rules. Alot of this has been mostly changes to stats, Edges and Hindrances. It is also a golden opportunity to go through the fluff of the setting, edit and improve the parts I'm not 100% happy with. The objective of this is to try and make the fluff more clear by tracking down and rewriting the contradictions about the setting, basically to make things a little less disjointed. The first of this so-called "What Is...?" series is a look at the lifting gas of the air vessels found within the setting; AEROTHIUM. 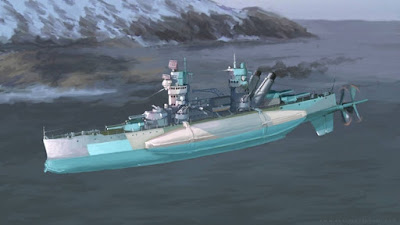 More commonly known as 'Lift Gas', Aerothium is the lifting gas used to give the airships of Darmonica erm...lift. Though in its natural state it is actually a mineral mined from the ground, then refined using an alchemical process to turn it into a gas. It is believed that the Ancient Terrans were the first to discover the process and then used Aerothium to enable their skyships through the skies. After the Fall of the Ancients the knowledge was lost, though it was rediscovered through a mixture of experimentation and the finding of fragments of information. It is widely acknowledged that modern processes of refining Aerothium are nowhere near as efficient as those used by the Ancients.

Aerothium gas, as mentioned, is used as the lifting gas for aero-vessels in the world of Darmonica. Though whilst not actually able to produce much lift on its own, it has an advantage over other gases in that it can be manipulated into producing more lift. It was discovered that if an electrical current was run through some Aerothium, the gas became lighter and thus had more lift. The greater the current, the greater the lift produced. It meant that aero-vessels could be larger and have greater carrying capacity. Though over time, Aerothium degrades with use and requires ever greater amount of current in order to continue producing lift. Typically, most aero-vessels will have their Aerothium replaced on a regular basis.

Currently, nobody is sure what the finite limit is for usable lift from Aerothium. There have been reports of wrecked skyships, dubbed 'air hulks', with Aerothium still in their gas cells riding lightning storms. It is believed that lightning strikes on these wrecks energize the gas in much the same way as an electrical current in normal operations. Though the fate of most air hulks, save for those salvaged, it unknown and thus it has been difficult for any serious studies to be conducted.

Thanks to the Skywright's Guild monopoly on Aerothium there exists a black market, unfortunately this tends to be for used gas siphoned from wrecked airships. Only the criminal or desperate would buy the stuff due to the increased risk for disaster with the reduced amount of usable lift available.

Aerothium could be used as the plot device for an adventure, typically with the characters need to get their hands on some for their airship or to sell to a crime lord. The latter option could work for a campaign as the crime lord finds he's been sold used Aerothium and comes after the characters in order to get some revenge.

More game mechanic wise, Aerothium could have a big impact on the characters' airship as it degrades. Every time the character actually piloting the airship critical fails their Piloting roll a -1 penalty is incurred to the airship's Handling, to a maximum of -4. This penalty is removed when the Aerothium is replaced.

Additionally, different grades of Aerothium can be used with penalties or bonuses to an airship's Handling depending on the grade.
Posted by Stephen 'Stormwell' Hughes at 06:00