Now flying the airship Stormrider following efforts last time to chart a new course for the crew's future, it was time to conduct their first venture with the new aero-vessel. Though it wasn't entirely plain sailing as there was dragonhawk related shenanigans, including an encounter with a flock of wild dragonhawks. The glory of finding an Alyeskan legend was tempered by the death of a key member of the crew. 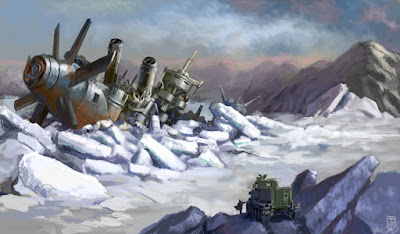 His breath steamed in the chilled air like a locomotive as he laid there gasping in pain from where the best had savaged his leg. Blood pooled round him as it poured from the ravaged flesh, though ice crystals were starting to form as the warmth was sucked from it and it began to freeze.What little he knew about battlefield triage was enough to tell him what he needed to know.

He wasn't coming out of this one alive.

The beast growled as it circled round, blood matting the fur round its mouth as it bared its teeth and snarled. Desperately he worked the action on his pistol and managed to extract the round that had caused the firearm to jam, just in time as the hound started charging towards him.

He could hear the shouts of the others, but they were too late...too damn late.

With great effort he brought the gun to bare as the animal leapt towards him, snarling as it bared its teeth and its pure white eyes seemed to burn with malice.

A strange calm seemed to come upon him and time seemed to slow as he resigned himself to his fate.

He was going to die here.

Die in this tomb of ice and metal.

The crew had opted to spend the night in Bowerstead Post and move on in the morning, some took it as the chance to deal with outstanding business in the settlement. Herbert sought out Ardan, seeking to enquire about the infant dragonhawk running amok in his warehouse. A deal was struck; Herbert could take the dragonhawk in exchange for an undisclosed favour being called in by Ardan at a later date. Happy, Herbert sneaked the dragonhawk onto the airship and stowed it on the orlop deck (lowest deck) of the airship with some crates of food.

All was going well until one of the ratings came down in search of some spare parts, though they made an abrupt U-turn upon seeing the dragonhawk and made to hurry back the way they came. Herbert ran after the rating and tackled them, though the rating managed to call out for help and word soon floated up to Tag on the bridge. Sebastian got sent down to see what the matter was, though when he reported back to the bridge he got told by Tag to deal with the problem. Though when he tried to get Herbert to get rid off the beast, Herbert managed to persuade the sharpshooter to let him keep the creature.

Over the next couple of days Tag eventually found out when a flock of dragonhawks encountered the airship and circled round it squawking and screeching. One of the crew mentioned about the young dragonhawk had brought onboard, after which Herbert was called to the bridge. Alex, meanwhile, had gone to one of the MG positions with the intent of shooting down the beasts....only for the gun to jam immediately (which turned out to be one 'upgraded' by Reginald). Back on the bridge Herbert explained himself and, despite his misgivings, Tag reluctantly agreed that the creature could stay but Herbert was fully responsible for it. The wild dragonhaks, in the mean time, had parted ways with the Stormrider.

A day or so later, the airship arrived in the area of Ragnar Point and the crew set about seeking a legend of Alyeskan lore; the Wreck of the Skellig.

After searching the sea ice for quite some time and eventually they were rewarded by spotting an object sticking out of the ice. Upon closer examination it appeared to be a wrecked skyship, half-buried in the ice. The ice round the wreck cracked alarmingly and so only a handful dare venture to cross over to the wreck, though moving at a slow and careful pace. The crew managed to reach the wreck without mishap.

Exploring the dark interior of the wreck they came across the skeleton remains of its crew, though no clue as to what befell the skyship and its crew. Though as they explored deeper into the wrecked aero-vessel the crew became aware that they weren't alone, rapid tapping noises and half-glimpsed shadows served to heighten the tension in the air. Alex was the first to be attacked, receiving a strike from behind that somehow failed to inflict any harm. Turning, Alex was able to see that his attacker was some type of wolf-like creature with silvery grey fur and pure white eyes. Though a shot at point blank from his gun crane soon put the beast down.

Sebastian was next to be attacked, but easily dealt with his foe. Though the crew could now all hear howls echoing throughout the wreck, prompting Tag to hasten down to the cargo hold in order to grab an item that Andrei had requested. However, in the cargo hold he encountered four of the beasts waiting for him. Two of them, in their aggressive haste to attack Tag, slipped on the icy floor and went sprawling. Having only two foes presenting an immediate threat, Tag was able to deal with them in short order. The third he also managed to deal with swiftly, but his pistol jammed and the four managed to get in to ravage Tag's leg. Collapsing to the floor and feeling his lifeblood flowing freely from him, Tag desperately tried to get his pistol cleared. He could hear the others coming, but he knew they would be too late.

The beast circled round and leapt to strike the killing blow, though Tag managed to get his pistol working and delivered a killing blow upon the beast. Ultimately, it was too little too late as the beast's momentum carried it forward and its teeth clamped round Tag's throat. As the others finally burst into the cargo hold, the last of Tag's life force left him.

Wow, a character death that wasn't at the hands of another character.

I'd be the first to admit that I thought the characters were going to be other tasks, though something that they may still end up doing at a later date. Though Tag's death was unexpected and puts a little bit of a spanner in the works for plot later in the campaign, though that can be worked around. Tag's player admitted that he was looking to retire the character soon, so Tag's death worked out.

Does now mean that technically isn't a captain no more, though I'm looking at addressing this.
Posted by Stephen 'Stormwell' Hughes at 06:00