After dealing with the Burning Knives gang, the crew set about preparing themselves for Andrei's latest job; a train heist. Though the crew managed to pull it off, it proved to be a case of 'Things Never Go Smooth'.  One of the characters has developed doubts over the recent activities of the crew and some resentment of the latest addition to the crew. 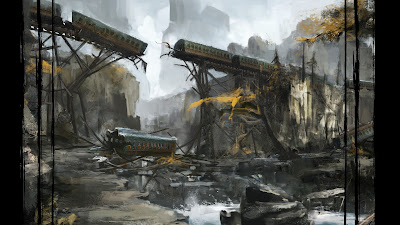 Before conducting the heist, the crew dealt with some last minute business. Jacob had his prisoner to turn in and claim bounty, requiring the crew to travel to Morrdun in order to do so. At the same time, Jacob also enquired about other bounties with the view of lining up a few jobs for the crew. Sebastian got licenced as a bounty hunter at the same time.

Alex leaned on his black market and underworld connections to acquire some items to aid with pulling off the heist. Among these were several sets of police uniforms, complete with badges, though only two were actually used. The extra ones were gotten with an eye to the future, Alex wanting enough for the whole crew to give them opportunities with future jobs.

Then, everyone was all set and ready.

Both Alex and Jacob donned police uniforms and then boarded the train with Herbert and Reginald, the latter pair would be acting as plain-clothed lookouts. Sebastian remained with the airship as backup in case the others required it.

Once the train got underway, the crew set about observing the movement and establishing the number of security guards on-board. They discovered there were about a dozen such guards and that they were rotated every so often throughout the train. Both Alex and Jacob got talking to some of them, being told that the guards were protecting a payroll shipment but the two figured the guards weren't being truthful. After a period of time had passed, the crew decided to make their move.

Alex made sure he was someplace unobserved and then radioed Jacob to 'warn' him of an inbound Windryder attack on the train. Jacob, in turn, told the security guard he was speaking and thus the alert caused the guards to spread out along the train in readiness for an attack. With the rest of the guards distracted, Jacob used his silenced pistols to kill the guard by the freight car before Alex picked the lock. Inside the freight car they were challenged by another guard, but they managed to bluff him along enough to kill him. Alex then proceeded to uncouple the caboose.

About this time the crew had heard the security guards on the caboose opening fire, thus lending some unexpected credence to the crew's report of an 'attack'. It turned out that a gang of motorcycle bandits had decided to attack the train, distracting the security guards but adding a complication to the crew's plans. Alex and Jacob quickly grabbed the item they'd come for and some other valuables from the freight car before trying to fend off the bandits.

A fair number of the bandits tried boarding the train, but only half of them actually made it on-board and climbed up onto the roof. The security guards' number were steadily whittled down as they fought to defend the train, but they took some of the bandits with them. Both Herbert and Reginald also took on the bandits, the good doctor striking lucky and managing to get a bandit on the roof above him with a shotgun blast. Before long the bandits were dealt with, though only a fraction of the security guards remained.

Alex and Jacob made their way to the engine and got the crew to bring the train to a halt, Alex went to fetch the other two before Jacob coldly killed the flootplate crew and the security guard before the engine got uncoupled. Reginald stops to tray and get the now uncoupled train to roll down the track whilst the crew escape in the stolen engine. They stopped some distance further along the line and called for Sebastian to come pick them up in the airship. Though whilst they waited, Herbert and Jacob went and did a bit of hunting and ended up encountering a large bear in the process.

After dragging the bear carcass back to the others and then proceeding to skin it and slice up the meat, Jacob then learned about the Dragonhawk fledging that was on-board when Herbert mentioned about using the meat to feed it. The bird jumped off the airship when it arrived, managed to arrest its fall enough to land without mishap not not gracefully before chomping down on the bear carcass. Herbert would try to tame the creature more later on without much success, though Jacob stepped in and did a much better job leaving the doctor feeling a bit resentful.

The crew headed back to Andrei to hand over the item recovered from the train, which turned out to be a Windryder relic. Though this time there was a gramophone playing some music and Herbert noticed a door ajar, though upon investigating he discovered a man tied to a chair and being beaten up for some information. Jacob intervened and helped make the man more willing to talk, though Herbert felt disgusted and questioning the morals of the crew.

Alex spoke with Andrei, the latter briefly chatting about music and the opera before getting down to business. Alex spied that the man appeared to have a large collection of keys which contained the right one to open the box that the relic was in. Andrei then said that may be a job in the grapevine, though he was still waiting on certain details. Though Andrei did hand over a fair amount of information on Reginald's brother that Alex had requested.

Well, we're finally to a point where I can do some plot stuff that I've had planned for quite a while now.

Though the players did nude my memory about some stuff to do with Natasha Rogan and a potential power play in Broken Spires. So theres some stuff that can be developed there.
Posted by Stephen 'Stormwell' Hughes at 06:00