A third Gwentshire related in a row? What madness is this?!

On little bit of a roll with ideas for the Gwentshire Chronicles setting, this week it is a location. Since Gwentshire is meant to be roughly located where North Somerset is, it shares some geographical features with its real life counterpart. One of those features is a combe, effectively a small valley through which a watercourse does not run. In Gwentshire there are many combes, the most notorious of which is Crostwick Combe. 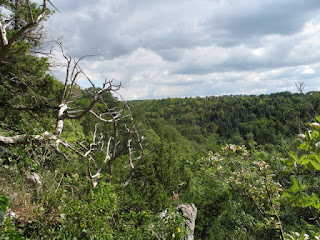 
Officially, Crostwick Combe does not exist.

It isn't marked on any maps and the scientific refuses to accept that it exist as no proof of its existence has ever been found. It is suppose to be located in the Weston Hills in sight of the Iron Age hill fort near the hamlet of Medbury, but many have searched and have found no trace of the combe. The locals, the older folk in particular, have stated; "To find the combe, let the light of the night be your guide."

Many have gone searching at night with little success, only a handful of people have claimed to have found the combe but have never been able to find it again. The only to actually find the combe is to use the light of the full moon and follow a path highlighted by the moon's glow. In the combe lies a pond up against a cliff, with a inscribed stone on the far side of the pond at the base of the cliff. What is actually written on the stone is unknown as nobody has been able to get close enough to read it and it is also partially obscured by plant growth.

The pond is said to be the residing place of the Old Wise Woman of Crostwick, called a mystic by some and a witch by others. Nobody knows who, or what, she is and it is stated that she's claimed to have been in the combe since "long before the Eagle marched across these lands."

Regardless of the truth behind the Old Wise Woman, many seek her out for answers to their questions. Answers she gives, though despite being truthful they are open to interpretation. She will only answer one question from a person and an ancient ritual is required to summon her in the first place.


The only real reason that the player characters would have for visiting the Combe is to see the Old Wise Woman, though finding it and summoning the Woman would be an adventure in itself. Only allow one question per character, though the Woman's answers are a little vague but they will have a ring of truth about them. This can be a way to give big clues to the characters regarding other adventures or villainous NPCs.
Posted by Stephen 'Stormwell' Hughes at 05:30