Oh hey, something else that hasn't been done in a while.

This week's post showcases potential allies or foes for the player characters when they've attracted the attention of the authorities. It is also a powerful group that's not to be trifled with, similar in some respects to the Agents and Rangers from Deadlands. 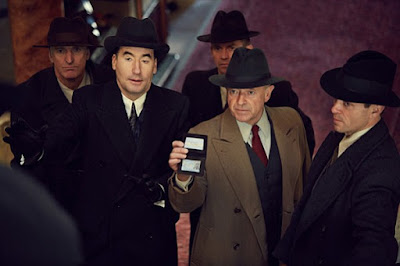 
The Kenworth Street Runners are a detachment of the Garda's Special Branch, stationed in the Alyeskan capital of Morrdun. They are independent from Alyeska's Air Guard, something that sometimes puts the two groups at odds especially as the Runners rank above the lawmen of Alyeska. Another cause of disgruntlement from the Air Guard is that its own force of detectives are restricted to investigating crime, whereas the Runners deal with matters of national security and conducts investigations to protect the Commonwealth from perceived threats of subversion.

On a normal day-to-day basis, the two forces keep their distance. The Runners only interfere with the Air Guard if a case crops up that concerns the national interests or the Air Guard arrests suspect who is on the Runners' watch list. The High Lord may request the Runners take over an Air Guard investigation, though the Runners aren't obliged to honour the request and will take on the case just to be polite.


As stated above, the Runners are meant to be used when the player characters attract the attention of the authorities. Generally this would be if the PCs get caught up in a spy ring, get their hands on a state secret somehow or get accused of treason. They're not a group to cross lightly and can cause a heap of trouble for the PCs. On the other hand, the Runners could be potent allies for the PCs if an opportunity arose with the influence alone that the Runners are able to bring to bear.