An ongoing project at the moment is going through and nailing the background lore for the wider world of the Frozen Skies setting.  Part of this has included a series of recent posts covering a revision of the Commonwealth and part of its military in the form of the Royal Aero-Fleet. Plan to do a few more posts concerning the Commonwealth, but realized that I haven’t written much about the most important person in the Commonwealth: Queen Lothwyn II. 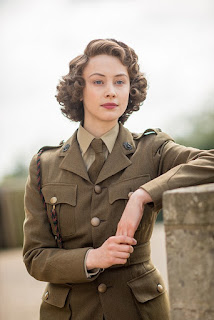 Banrigh (Queen) Lothwyn has been the Commonwealth’s monarch since just after the end of the Great Darmonican War, having inherited the crown following the death of her father King Alfred. Not only did she had to contend with being the youngest ruler in Darmonica, she also had to get used to a world at peace after growing up in one at war. Her coronation was seen as a fresh start after thirty years of war, though her reign thus far has seen an uneasy peace hold sway and tensions once again on the rise.

Though she doesn’t actually govern the Commonwealth she has a lot of influence to direct policy, though she has rarely used this power.

Lothwyn stands round 5’6” tall and is of slim build. She has coal black hair with slate grey eyes and a pale complexion. On both arms she has Celtic style blue spiral tattoos that run from her wrists up to her shoulders.

The Queen has a handful of other duties that include giving Royal Assent to new legislation passed by parliament, thus making them into law. She is advised by the Provost Court, a body made up of her vice-regal representatives in various provinces and certain large towns. Depending on what they represent, the members of the Court are called Provosts or Lord Provosts and effectively act as mayors or state governors.

Given that she is the Commonwealth’s head of state, it is very unlikely that the player characters will get to meet Queen Lothwyn unless they’ve done a great service to the Commonwealth. It is more likely for Lothwyn to be in the background, for example a town could turn out to see her visit and thus provide a distraction for the characters to rob the town’s bank.
Posted by Stephen 'Stormwell' Hughes at 06:00