This week we dip back into Keep The Home Fires Burning, a setting that we've only infrequently looked at. Trying my hand at an adventure in the KTHFB setting, something thats been kicking around in my head for a while. The basis overview is that the characters have been sent to a hospital where corpses have been stolen from the hospital's morgue, though the truth behind the thief is more horrible than the characters realise. 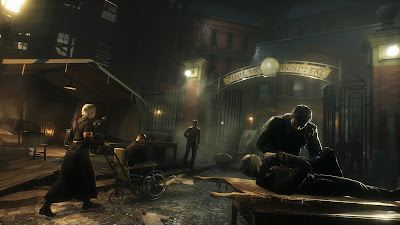 The characters are tasked by their superiors at the Home Office to investigate a spite of thievery of bodies from the Albion Hospital on Burke Street in London's East End. The Metropolitan Police has had little luck in solving the case and the authorities, fearing dark means being involved, dispatch the characters to try and get to the bottom of things.

At the hospital the morgue attendant, a teenage lad by the name of Robert O'Hare who'd lucked on being conscripted by turning 18 as the war ended. O'Hare appears to be nervous round the characters, he'll claim his anxiety is due to fear of losing his job and that his family had originally come from Dublin. His uncle is a respected surgeon at the hospital and had gotten Robert the position of morgue attendant in hopes of giving the lad some practical experience and encouragement to enter medical school. Robert is also the one who raised the alarm about the missing bodies, something which is confirmed by the police report.

The hospital is short staffed due to a mixture of wartime conscription and the flu epidemic causing the hospital to loose staff. What staff remain are overworked dealing with flu victims, whilst O'Hare is the sole morgue attendant but has to help out the other staff. The police suspected that the bodies may have illegally be taken for use as cadavers, but thus far enquiries at medical schools in the London area failed to support this claim. Though the police remain suspicious of O'Hare.

When the characters investigate the morgue, they won't find much unless they look real closely. Either by spotting wheel marks on the floor (possibly via a raise on a Notice roll) or exploring the rest of the basement area in which the morgue is located, the characters will find morgue trolleys being left in another part of the basement. O'Hare, if questioned, will state that these trolleys are broken and he'd put them there until they could be fixed or replaced. Investigating further will reveal no report has been made about these trolleys being broken and there doesn't seem to be an actual fault with any of them.

Searching the room with the trolleys will reveal some curious marks on the floor leading to a false floor covering a hole leading down to an unlit tunnel. The tunnel appears to be very old, perhaps medieval or even Roman in origin. The tunnel is also partially collapsed and cramped, barely big enough for a single person to crawl along. After a few hundred feet the tunnel opens up into a large cavern, here an overpowering rotten smell greets the characters. As they quickly discover, the cavern is home to a warren of ghouls along with what remains of the bodies they took from the morgue.

The ghouls had been stealing from the morgue for some time, though they were caught in the act by O'Hare one night. The lad, scared out of his wits by the encounter, pleaded for his life and managed to strike a deal where he would leave bodies by the false floor where the ghouls could get to them without fear of getting caught. Somebody higher up got suspicious when bodies started going unaccounted for, something O'Hare pass off as a simple matter of thievery but he is now scared of being found out.

Refer to the Setting Rules for KTHFB, count the morgue and basement area of the hospital as being Infection Rating 4. The characters' Immunity bonus (+1 per Rank) and a Germ Mask (+2) will help off-set the worse of the penalty on the Contraction Roll.

Weapons wise, it is suggested that the characters have access to pistols, revolvers and small melee weapons suitable for the period. Weird War One is highly recommended for weapon stats.

No full stats for O'Hare, though he's considered to have d6 for Attributes and Core Skills.

A Fear Check at -1 will be needed when the characters encounter the ghouls, likewise there will be 1d4+1 ghouls per character.

Thanks to Richard Woolcock for the Ghoul stats.
Posted by Stephen 'Stormwell' Hughes at 06:00