After their tussle with the Dark Claws, the crew of the Waylander opt to head to the Commonwealth's Home Isles to answer the summons of Reginald's father. Did mean that Herbert's court martial was postponed again for another session, this was a necessity as one of the players was out of the country and had asked to be present for the court martial. Though it did mean that the players got to visit and learn more about the world outside of Alyeska. 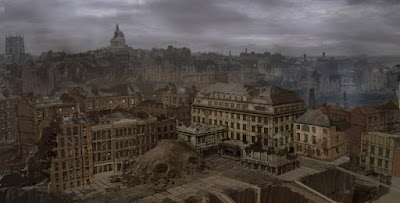 Across the Great Ocean

The ocean that separates Alyeska from the 'Core' states of Darmonica has been racked by storms since the end of the Great Darmonican War, highly theorized to be part of the fallout from the event known as the 'Blast'. It means that travel across the ocean is difficult, possibly even resulting in damage to the aircraft attempting the trip. Normally the crew would have its Ace pilot Tag, though his player was the one who was absent and as GM I made his piloting rolls as required.I had to spend a couple of bennies right at the start of the game to stop the crew running afoul of certain doom.

So things were off to a good start already.

Thankfully the journey across the ocean proved to be eventual and after a couple of days the mist shrouded hills of the Home Isles came into sight. The crew were also confronted with considerable more shipping, both maritime and aerial, than they'd ever seen in Alyeska. As their airship drew near they soon more plenty of aircraft, ranging from light aeroplanes through to gigantic skyships. They were directed to the main aerodrome that served the Home Isles' capital, Lindun, and as they drifted down into their mooring berth they could see a noticeable military presence in the form of anti-aircraft guns and armed soldiers. Though Herbert also noted that there was a much greater civilian presence compared to when he'd last visited the aerodrome some years earlier.

A military jeep pulled up and a pair of provosts climbed out before approaching the airship, though they did introduce themselves and explained that Herbert was being put under house arrest at a nearby barracks for the duration of the crew's stay in the Home Isles. So, without any real objections from the crew, Herbert went with the provosts and found himself being put in an officer's quarters rather than a barrack block (because 'security'). Herbert received two visitors, the first was from the Army Service Corps to take his measurements for a new uniform to be worn at the court martial. The second visitor was a Lt. Williams from the Judge Advocate General's office to provide consul for the aforementioned court martial.

Lt, Williams explained how the proceedings of the court martial will work, then asked for Herbert's version of events prior to him being absent without leave. Herbert admitted that due to his big mouth he wasn't well liked by his fellow soldiers, plus may have incurred the wrath of a superior officer by talking about said officer's wife whilst within earshot of said officer. He also went onto explain that whilst out in the Wulflands on a patrol he woke up one morning feeling extremely groggy (he swore blindly that he hadn't had a drop of alcohol whilst on patrol) and that the rest of his patrol was gone. Lt. Williams explained that the official version of events was that the patrol had come under attack by wulvers and that Herbert had gone missing in the confusion, later to be listed as missing in action. Lt. Williams also explained that since Herbert was absent from his unit for more than 30 days he'll be tried as a deserter, so strongly suggested sticking to the official version of events in hope of gaining a favourable verdict.

The rest of the crew were picked up by a limbo and driven out of the city, noticing the scars still lingering from the war and the reconstruction effort. The city and its new suburbs gave away to the open countryside and after a couple of hours the car drew up in front of a large manor house. Servants ushered them inside to what was called the 'Cream Room' and told them to wait until his Lordship was ready, though a servant remained in the room to keep an eye on the crew. After half an hour, Reginald was called through to speak to his father in the room next door. Alex got close as he could to the door in an attempt to eavesdrop whilst Sebastian discreetly spoke to the house servant about answering the call of nature in order to get a tour of the house.

Reginald's father, Lord Charleston Spitsworth, effectively disowned his eldest child and had changed his will so that Reginald's younger brother Edmund would inherit the family fortune. Additionally, Reginald's access to the family's bank accounts had been blocked and various bank managers made aware of this development. Meanwhile Sebastian ran into and got talking to the youngest if the Spitsworth siblings, Reginald's sister Elisa (who got the Love Interest adventure card played on her). Elisa mentioned that she was going to diplomacy, mainly as a way of escaping house and seeing the world, plus she also mentioned about current tensions between the Commonwealth and the Artian Confederation.

Sebastian rejoined the others, with a silk item showing in the breast pocket of his jacket, just as Reginald comes out from speaking with his father. Tag then gets called into the other room with a letter of introduction, returning a short while later saying that he'd gotten them a job. The crew were then informed that they would not be spending the night in the house as lodgings had been made available elsewhere on the estate. This time they were given a lift in a different car driven by one of the groundsmen and taken to a cottage on the other side of the estate, though the cottage had been untouched for a number of years after its previous occupant died. The crew tidied up the place best they could and picked which room each of them were going to have.

Alex and Sebastian had decided to try and sneak back into the main house later that night, though for completely different reasons. Some night after it'd gotten dark, the pair of them tried sneaking out but were spotted by Reginald who decided to challenge them. Alex tried to persuade Reginald that he and Sebastian were just going out for some fresh air and perhaps a smoke, though Reginald remained unconvinced. Out of frustration, Alex went back into the cottage and set alight to the room that Reginald had claimed before managing to sneak back out of the cottage unnoticed. With Reginald distracted with trying to save his belongings, Alex and Sebastian made for the main house.

Alex went for Lord Spitsworth's office, specifically after any interesting paperwork (the Reveal adventure card was played here). Among the things Alex found was correspondence between Lord Spitsworth and another member of parliament about seeking justification for a military campaign against the pirate haven of Broken Spires. Also, since Lord Spitsworth has strong ties to them, there are papers and deeds relating to the Skywrights Guild. Sensing an opportunity, Alex pockets a couple of blank skyship deeds before sneaking back out the window.

Sebastian, on the other hand, sneaked into the main house in order to see Elisa once more. Alex, now back outside, starts raising the alarm about the fire at the cottage and rouses the entire household. Sebastian uses the commotion to sneak out of the house, then rejoins the others a while later back at the cottage which is now well and truly ablaze despite the efforts of the estate staff tackle the flames. The reunion coincides with the arrival of the local fire engine and Alex convincing the estate staff that the fire was probably caused by an oil lantern being blown over by a gust of wind or knocked over by Reginald's carelessness.

Admittedly, the opportunity for the characters to travel beyond the boundaries of Alyeska was always there....they took it a bit sooner than expected.

It was a role-play heavy session with no combat, certainly an interesting change of pace. Least I manage to tease some plot, hopefully the players will make a note of it so that it'll come in useful later when that plotline develops. But things are being setup quite nicely by the characters' own actions and in a better way than I'd originally planned.

Hopefully next session the whole group will be present so that we can get Herbert's court martial done and out of the way. Actually spent some time doing some research on court martials, including the old British tradition of using swords. Herbert will be tried as a deserter since he was absent from his unit for more than 30 days, though it'll be interesting to see whether he does as Lt. Williams said and go along with the official story or tries to get evidence that there was a conspiracy to have him killed.
Posted by Stephen 'Stormwell' Hughes at 06:30