Last week, the crew of the Waylander headed to the Commonwealth's Home Isles to answer the summons of Reginald's father. The family reunion proved to be short and bitter sweet as Reginald found himself being disowned by his family in addition to their lodgings being burned down under somewhat hazy circumstances. It was finally decided to take care of some outstanding business and head back to Alyeska to get Herbert's court martial out of the way. 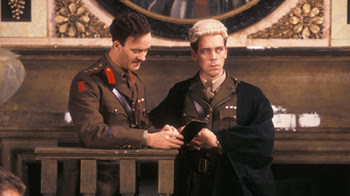 Back to the Frozen Skies

After the cottage fire saw the crew loose their accommodation for the night, and despite the offer of being put up at the local village inn, the crew decided to head back to their airship despite it being a two hour drive in the middle of the night. Upon arrival back at the Waylander, Tag announced that he wanted an early started and that everyone was to be up at 0700 Hours even though it meant every was going to get precious little sleep.

Scant few hours the crew are up again, groggy from the lack of sleep and drinking coffee like its going out of fashion. They contact the nearby military barracks via telephone and arrange for Herbert to be brought to the airship along with his provost escort. Final preparations are made before they get underway and attempt to cross the storm-wracked skies over the Great Ocean to Alyeska. Increasingly foul weather dogs the crew for three days until something is spotted in the clouds ahead, though the clouds part enough to reveal another airship directly in the Waylander's path. Tag managed to steer the Waylander and avoided a collision with the other airship, then circled back round so that they could get a better look at the unexpected company.

The other airship looked like it had taken a fair amount of damage; some of her engines had been blown off, her gasbags were ripped and signs of being shot up by aircraft. No name could be seen as it was obscured by the damage and there was no answer when the crew tried hailing the mysterious airship over the radio. Tag made the decision to have the other airship lashed to the Waylander so that they could board it, if anything to see what was worth salvaging.

Reginald went to check out the airship's electrical systems and generators in her engine room, only to discover that her electricals were all shorted out and the generators dead. With no electrical current to manipulate the Lift Gas, there was a bit of confusion over how the airship was still in the sky until it was realized that the Lift Gas was probably reacting to the electrical charge of the storm.If they took the airship out of the storm it would most likely fall out of the sky as the residual charge from the storm wore off, so getting the electrics back up and running was a priority. Initially Reginald had problems effecting repairs, though by the time Tag came to see what the matter was the problem had been dealt with by Sebastian stumbling across a storage cupboard marked 'Electrical Spares'.

After giving Reginald a chewing out, Tag headed back towards the crew area and the bridge to check up on how well Alex had gotten on. For his part Alex had been checking out the crew quarters and increasingly coming to the opinion that the airship had been attacked by raiders. He also found and disarmed a number of traps, though nothing of value. Alex also came to the rescue when Reginald found explosives in one of the electrical generators when he did his final checks before starting them back up. Having done all they could and, most importantly, got the power back on the crew were able to take the airship under tow.

Arriving in Gravenburg, Tag managed to secure an air dock for the airship by presenting a sealed letter from Lord Spitsworth and making a donation to the Widows and Orphans Fund. Alex spotted somebody who seemed to recognize him before hurrying off, Alex followed the man to a nearby warehouse used by a gang he'd worked with for a time before parting ways. Alex confronted the man, who was surprised to see Alex was alive (but wasn't aware of his new name) and gave the impression that the gang wasn't going to be happy about this state of affairs. Alex then showed the man the explosives he'd acquire earlier and convinced the man to keep their mouth shut until Alex had had a good head start.

Without further delay, it was off to Calharrow and Herbert's date with military justice.

Tag went with Herbert as his defence lawyer, also wore his air force officer's uniform and seemed to know at least one of the officers presiding as part of the judge's panel. The charges of absent without leave and desertion were read out, then the official version of events that Herbert's patrol had been attacked by Wulvers during which he went missing and was presumed dead. Herbert challenged this, claiming that his patrol had deliberately left him behind when they broke camp and that there had been difficulties between him and his comrades. Herbert also cited problems with his superior officer and Tag presented the court with a pile of evidence such as telephone logs that help collaborate Herbert's story. When asked why he didn't report in when he returned to civilisation, Herbert stated it was because he didn't trust the military and feared for his life if his survival was made known.The panel of officers asked a few more questions before they were satisfied, then gave their verdict.

Herbert was cleared of any wrongdoing, given an honourable discharge with back pay and made exempt from further military service. A free man once more, the good doctor was able to join the crew in getting into further trouble...

It was little bit of an interesting game, we started incorporating elements from the new edition of Savage Worlds such as no XP and Bennies being able to do much more. The group also decided to stick with their characters as they currently are, which will limit what of the new rules we can use. The stuff we have included seemed to go down a hit and I'm trying to get into the habit of awarding Bennies.

So yeah, the crew have a potential new airship. I need to finish updating Frozen Skies for SWADE, though some of that will extend into doing some more airship stats.

As for Herbert's trail, part of why it went so well is that the players RPed it well and partially because of my bad dice rolling. We did it as a Social Conflict with three opposed rolls, I pretty much got a 1 on two of those rolls but decided not to spend a bennie to re-roll as I thought it was being RPed really well.
Posted by Stephen 'Stormwell' Hughes at 06:30