So a new edition of Savage Worlds recently got announced, mostly consisting of tweaks here and there with new rules. Like a lot of people I've closely been following the previews that have been seen so far, but nothing that seems to majorly effect Frozen Skies. Though ultimately we'll have to wait until the release of the new rules after the Kickstarter later this month. 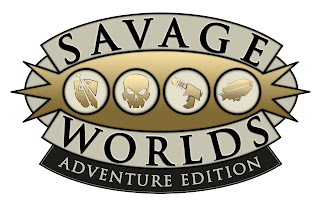 BLACK ICE is the codename I'm using for the SWADE update for Frozen Skies, a nod to how the edition was called 'Savage Worlds Black' for a while. Black Ice will be a PDF that will probably be released some point after the SWADE Kickstarter, least when I've had the chance to read through the new rules and see how they effect Frozen Skies. Whilst I cannot say for sure what will be changed, from the previews shown so far there are a couple of things;

There may be other changes like, for example, to vehicle combat, etc. It depends what is featured in the new edition, though Black Ice may contain new content and errata for Frozen Skies.

Pinnacle's other recent announcement was the Savage Worlds Adventurer's Guild (SWAG), a program that will allow people to create and then sell their own Savage Worlds creations through the likes of DriveThruRPG without going through Pinnacle's normal official licensing program. SWAG is a platform for new creators to sell their work.

At present I can't really say much about it until Pinnacle releases more details, though Melior Via has already expressed interest for people to release content for Accursed as part of SWAG. Whilst it would be neat for that to happen with Frozen Skies I would rather wait until SWAG has been running for some quite and I've established more of the setting's framework before opening it up for SWAG.

Regardless, exciting times ahead for Savage Worlds!
Posted by Stephen 'Stormwell' Hughes at 06:30