For those who have been following on social media, you'll be aware that I'm currently working on getting Frozen Skies updated to the new Adventure Edition of Savage Worlds. A draft of the update document (dubbed 'Black Ice') has also been shared and covers rules and gear, etc. The biggest task is updating the various NPCs due to changes to skills, Hindrances and Edges. Decided to redo a character previously posted on the blog, partially as some practice and partially to showcase differences. 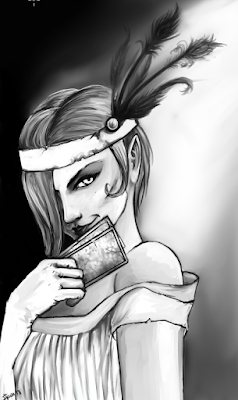 The character I decided to redo was the Genchi femme fatal Kaelin Madigan, particularly as I thought some of the new Social Edges may work for her. It was done using the character generator on the most awesome site Savaged.us (though its not completely without its bugs).

One of the changes with SWADE was Small being made a Minor Hindrance rather than a Major one that it was in Deluxe, meaning that Kaelin only had three Minor Hindrances. After some consideration decided to take Ruthless as a Minor, felt that it fitted with her character as somebody who'd take people out but only if they got in her way.

Next up was skills, something else that has seen changes. Some of the skills from Deluxe have been combine, there is now a bunch of 'core' skills everyone gets at d4 and theres one or two new skills. With less skill points to spend at character creation, found a little tricky trying to match her skills early on and ended up spending a whole load of Advances trying to get certain skills up to where they met Edge requirements. Performance is a new skill that I gave Kaelin because I felt it work quite well with her character concept, likewise Common Knowledge (which is a Core skill) I increased to d6 to show that she has a finger on current affairs.

With regards to Edges, she's only missing Very Attractive but has four new Edges. A good chunk of the new Social Edges seem to revolve around Support rolls, but Humiliate, Streetwise and Retort were ones that work for a 'lone wolf' character that I envision Kaelin being. Feint I decided to take partially because of Kaelin's lone wolf aspect, partially because I envision her being a tricksy sort of fighter. She seems a pretty capable character, though I could give her extra Edges like Very Attractive and Martial Warrior to improve her potency. Regardless, she should be an interesting character to run.
Posted by Stephen 'Stormwell' Hughes at 06:00