After escaping the icebound wrecked skyship and Alex cementing his position as captain, the crew set about completing the second of Andrei's tasks. This entailed the crew indulging in a bit of sky piracy, though with almost disastrous results. Other highlights include a character dispatching their hated foe and a new member to the crew. 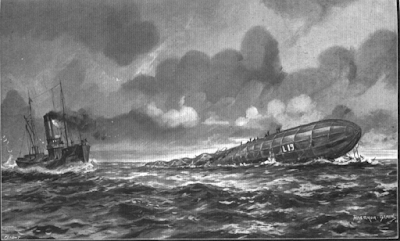 Following on from their tragedy tainted adventure in the wrecked skyship and meeting up with Andrei to hand over the recovered artefact, Alex got the crew busy with preparations for the airship heist. Reginald was tasked with crafting a radio jammer, the idea being to inhabit the target airship from calling for help. The others were charged with gathering various items for the crew to use as disguises, whilst Alex gave them all code names to use during the heist (which turned out to be the names of members of a certain gang).

It was decided to intercept the airship out over the ocean, if anything to help minimize the chances of somebody coming to the airship's aid. At first it seemed the heavy cloud cover would aid the crew, though the target airship spotted them first. The crew had their radio jammer active, though whilst it meant it was difficult for the target airship to communicate with its fighter escorts the same was true for the crew to talk to their own fighters. It meant all the fighters were operating on their own and unable to co-ordinate efforts, it also meant that only one of the escort fighters of the target spotted a signal lamp message for it to go investigate the appearance of the Stormrider.

Having concluded that it was about to come under attack from sky pirates, the victim airship opened up with its MG turrets at long range. One of the Stormrider's own outflyers got hit and suffered damage to its controls but stayed airborne, though Sebastian manage to take the gunner out with an incredibly lucky sniper shot at extreme range. The Stormrider and its outflyers closed the distance, the fighters taking it in turns to shoot out the engines of the victim airship. The damaged outflyer's pilot, perhaps smarting from the damage his plane had taken, proved to be overzealous with his shooting and raked along the side of airship with his guns. An explosion signalled a catastrophic loss of Aerothium and the airship began to drop down towards the ocean, though the crew managed to patch things enough to do a 'controlled' crash landing upon the water as one of its two escorts got shot down as well.

With their target floudering, Alex switched off the radio jammer long to broadcast the following message; "You've been attacked by the Burning Knives, surrender now and no further harm will come to toy."

Unsurprisingly, the crew of the target airship meekly surrendered and the Stormrider's crew quickly boarded her in search of loot. Alex made his way to the bridge to ensure that the crew complied with his demands, identifying himself as Peter Wisdom as he did so. Whilst Alex was on the bridge, a bounty hunter came who Alex knew but the man didn't recognize Alex in return (Alex was using one of Reginald's devices to make him look like the real Peter Wisdom). Luckily Alex managed to convince the bounty hunter, a man called Jacob, that he was an associate of somebody Jacob knew. In turn, Jacob revealed he'd come for the keys to the brig so that he could fetch a prisoner he was transporting and was going to need a lift.

Meanwhile Sebastian headed to a cabin indicated by Andrei to have a safe containing what the crew had come for, only to run into a Shackleton as he rounded a corner. Seeing the man go for his gun, Sebastian tried to intimidate him but only succeeded in making the man momentarily puzzled and confused as to whether Sebastian was being serious. Taking advantage of the man's hesitation, Sebastian shot him with pistol. The Shackleton fired back with his machine pistol, almost mortally wounding Sebastian in the process. As he waited for the Shackleton to deliver the killing blow, Sebastian closed his eyes as the end...never came.

A tidal wave of water smashed a door into the Shackleton and, in turn, smashed him against the wall of the corridor with enough force to ensure he wasn't getting up anything soon. Shocked at his sudden and unexpected reprieved, Sebastian soon quickly realized that he was severely injured and that the airship he was on was beginning to sink. Fortunately it wasn't long before some of the others came to his aid and retrieved the contents of the safe. Before leaving, Sebastian checked the Shackleton for anything of value and discovered a contract for bodyguard duties for a Lord Bellington (the same Lord who'd put a bounty on Sebastian).

Meeting up back on the Stormrider, it turned out that Jacob also knew Herbert and (to a lesser degree) Reginald. Jacob also found out who Alex really was and that he'd been using a device to alter his appearance. It was also discovered that Lord Bellington had been on the airship and, with Jacob's help, Sebastian spotted the man in one of the lifeboats. A single rifle shot rang out and His Lordship disappeared over the side of the boat, thus dealing with least one of Sebastian's enemies. Alex ordered one final ruthless act against the survivors of the airship, then transmitted the following message; "With the regards of the Burning Knives."

There was also another resolution before everything was wrapped up, some detective work by Herbert to discover who had left a bottle of fine wine on his bunk. After conferring with Alex, Herbert soon figured out the likely culprit. He then went and confronted Reginald, who pleaded complete innocence in the affair. Though Herbert saw that the nobleman had, badly, lied and punched him in the face leaving a nasty black eye. Some of the others quickly arrived and prevented things getting more heated, plus Alex gave Reginald a dressing down and warned of possible consequences if Reginald did it again.

The loss of Tag doesn't seem to have held the crew back as Alex is proving to be a strong captain, least in the sense of personality and getting people to follow orders. The airship heist had been something the crew was hesitant to do when Tag was still in charge, but Alex's 'don't care' attitude and his plan of action saw the crew finally pull it off. I have to give credit to Alex's player for coming up with a plan that framed his enemies, the Burning Knives gang, so that the retribution falls upon them rather than the crew of the Stormrider. Though it'll be a while before the fallout from the airship heist happens, so it'll be curious what else Alex does to bring about the Burning Knives' downfall.

Now that the crew has dabbled in sky piracy it opens up some opportunities and there is still plot with Broken Spires that still needs to be resolved.
Posted by Stephen 'Stormwell' Hughes at 06:00