After a break due to Christmas and New Years, the group met up again to continue the campaign...though we were short a couple of players. We picked things up from where we'd left off, the immediate aftermath of Tag's death and the surviving crew needing to escape the wrecked skyship. It was a chance to use the Chase Rules from SWADE, which I'll give my thoughts on later, and the crew then made their next move. 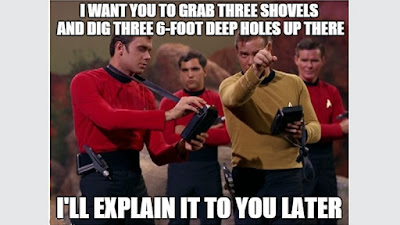 Alex, Herbert and Sebastian reached the cargo hold of the wrecked aero-vessel just as Tag finally perished after killing the last Ghost Hound. Whilst Sebastian stood guard, Herbert quickly check Tag's body and confirmed that he was beyond saving, Alex, hearing the howls of the other beasts onboard, quickly grabbed some items from Tag's corpse (including the artefact they'd come for) before suggesting that they make their way back to the Stormrider with all due haste.

During the flight through the icy corridors and passageways of the wreck, the crew found themselves being pursued by a pack of four Ghost Hounds. Due to the head-start the crew had, only one of the beasts managed to get close enough to get a mouthful of Sebastian's coat. The good doctor and the sharpshooter managed to deal with the beasts with well placed rifle shots, Alex was focused on getting to safety.

The Tyranny of  Captain Alex

Having made it back to the safety of the Stormrider, Alex immediately ordered two crewmen (the two who had restrained him when things became heated previously) to head out to the wreck to start salvaging it. Alex then proceeded to release Reginald from the brig and got him to 'test' the Stormrider's main guns in the direction of the skyship wreck, smashing the ice round it and trapping the two crewmen in a tomb of metal and ice. With that act of petty vengeance concluded, Alex then cemented his captaincy and introduced a new set of rules for the airship ratings to follow.

Having established himself as the new captain, Alex then ordered a course be made for Broken Spires despite the crew's original plan of avoiding the pirate haven. Though with Alex being the only one giving orders and a general lack of other ideas, Broken Spires it was. Approaching the canyons that were the natural gates to the ramshackle town, another airship was spotted ahead of them making for the settlement as well. This airship bore the name 'Ogman's Hand' below a large picture of a hand of playing decks, though the airship made no move towards the Stormrider and came into one of the aero-docks.

After docking the Stormrider, Alex's plan started to become clear as he sent some ratings out for supplies before taking Sebastian with him to go visit Natasha Rogan and her outfit of female sky pirates. Meeting with the leader of the Banshees, Alex informed her of Tag's death and of the supposed Commonwealth plot against Broken Spires. Tash took both pieces of information with a stoic calmness, then listened to Alex's offer of perhaps using the latter to possibly take out a rival gang. After explaining about the 'politics' of Broken Spires and how it was governed by an uneasy alliance of the most powerful captains, Tash said that she would consider the offer. When Alex asked about a certain broker of secrets that Tag had dealings with, Tash said she would see about getting word to them.

The crew stayed in Broken Spires for a couple of days until they were approached by a smartly dressed gentleman, who identified himself as an agent of Andrei. The man first stated that Andrei had requested the crew's presence in Gravenburgh for a meeting, also stated that Andrei now owned both the Stormrider and the front company that Alex had setup. Needless to say, preparations were made for a hasty departure to Gravenburgh.

The crew arrived in Gravenburgh at the meeting point, a warehouse district close to the airfield that was strangely deserted despite it being the middle of the day. Sebastian set himself up with his rifle on top of a nearby warehouse to give him a good vantage in case of trouble and he confirmed that the immediate area was quiet. There was a sole limbo with a uniformed driver waiting patiently, though only Alex was allowed into the passenger compartment whilst the driver remained outside.

Waiting inside the limbo was Andrei, who greeted Alex and offered condolences with regards to Tag's death. The two then proceeded to talk business, chiefly the two job offers that Andrei had previously discussed with Tag. Alex agreed to hand over the box from the skyship wreck that resulted in Tag's death, he also agreed to do the airship heist job that the crew had been reluctant to do. After payment was agreed upon and Andrei handed over the necessary information, the crew set about preparing themselves.

As mentioned, we got to use the Chase rules from SWADE.

We went for the 9 Chase Card setup recommended in the rulebook, a pack of 4 Ghost Hounds on Card 1 with the PCs on Card 3 to represent a head-start. There seemed to be a little bit of confusion between Actions and Free Actions, though things still went fairly smoothly as everyone was mainly focused on keeping ahead of the beasts and 'escaping' from the skyship wreck. It proved to be pretty short, lasting only two rounds before the players managed to defeat the Ghost Hounds. The beasts, for that part, failed to catch up and only got lucky when they went before a player. For melee only characters, it seems they need to start closer to their opponents during setup or ensure they get higher ranked Action Cards.

I really really like the SWADE Chase Rules over their Deluxe ancestor, though I need to try them out more so my group gets used to using them.

As for the campaign itself, despite my fear of a setup with Tag's death it appears we're still on track with regards to plot. Though the players have managed to trigger some stuff early and thats open up a few opportunities for me to advance the plot.
Posted by Stephen 'Stormwell' Hughes at 06:00