Quick follow-on post this week to a post from last month, which detailed some changes that I wished to make to the Commonwealth. Wanted to go with a more Celtic feel for the nation, something that I hope the changes help capture. So, without further ado, I present a revised version of the Commonwealth. 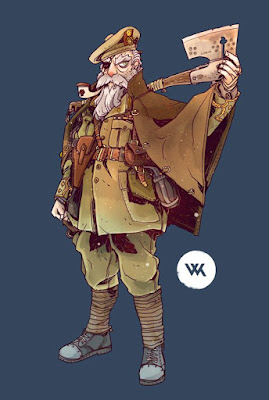 For the time being I'll be using Irish as the language of the Commonwealth, though I may look at doing a faux Celtic language at a later date.

The Clans form the cornerstone of Commonwealth society and, in some cases, even influences it.
Each clan is led by a Clan Chief and is made up of a core family after which the clan is named, plus a number of affiliated families who are linked to the core family but have different surnames. Additionally, each clan maintains its own militia forces mainly protect the clan's interests as well as to help defend the Commonwealth should the need arise.

To resolve internal disputes and help keep the clan's legal affairs in order, each clan will appoint an official known as a Justiciar. In addition to handling internal clan disputes, the Clan Justiciar also the official that deals with marriages, death certificates, etc. A Lord High Justiciar is appointed by the Crown and is charged with ensuring with keeping the peace between the various clans.

The third important position within a Clan is the Clan Ravener, effectively the Clan's representative for dealing with those from outside of the Clan. The Raveners also form the upper house of the Commonwealth's parliament.

The governance of the Commonwealth is in three parts.

There is the Sovereign or the Crown, the ruling monarch of the Commonwealth. Depending on gender, the monarch as the title of Rí (King) if male and Banríona (Queen) if female. The monarch is the head of state, but take little direct part in governing the country and remains neutral in political affairs. The monarch's main role is to appoint the head of government and give Royal Assent to bills and thus make them into valid laws.

Finally there is the Commonwealth Parliament, or Oireachtas, which is the legislature of the Commonwealth. There is upper house called Badhgan's Chamber, or the Chamber of Ravens, and is comprised of the Raveners from the various Clans. The lower house is called the Assembly, or Dáil, and is made up of elected officials called Assembly Delegates. The Taoiseach (or Leader), and head of government, comes from the Assembly and must hold the confidence of the chamber in order to remain in office.

The Garda (or the Guards) form a national police force for the Commonwealth, though it does provide local policing in some areas. The Garda tends to focus its efforts on high profile crime and internal threats to the Commonwealth. Local policing tends to be in the hands of smaller police forces generally called town or city watches, though provincial level forces also exist. The watchmen of these forces provide day-to-day policing, though cases may overlap with the Garda.

Posted by Stephen 'Stormwell' Hughes at 03:00