Last time our intrepid crew pulled off an airship heist and framed a rival gang for the crime in the process. For one character it really was the chance to shine...and almost die in the process. It was also the opportunity for a new character to join the crew, filling a spot that had recently and tragedy been made vacant.

This week the crew were in for an unexpected and potentially nasty surprise... 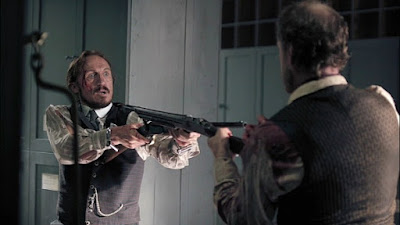 Revenge of the Burning Knives

Having successfully pulling of the airship heist, collateral death and damage notwithstanding, the crew returned to Gravenburgh in triumph. After docking their airship, the crew found themselves being greeted by a smartly dressed gentlemen who handed them a note about meeting Andrei. Heading to the location, they found it to be outside the airport terminal and in the form of Andrei's limo where they'd previously met the Tylander keeper of secrets. Sebastian set himself up on top of a nearby billboard with his sniper rifle as Alex and Herbert got in the limo. Jacob, after giving the limo a little bit of a head start, followed after the limo on foot.

As expected, the limo driver took a roundabout route to his destination. Jacob tried keeping up with the vehicle, but ultimately fell far behind long before the car reached its eventual destination. Alex and Herbert found themselves outside a club, though were directed through it to the other side of the building. Following further instructions, the duo climbed to the top floor of a nearby tenant block where Alex finally met Andrei. Money for a job well done was handed over, snippets of another job made and it was casually mentioned that the Burning Knives gang were looking to ambush the crew at their airship.

Luckily Alex had a radio on him to warn the others back on the airship about the attack as he and Herbert raced back as quickly as they could. Jacob got the ratings onboard the Stormrider organised into some form of defence as Sebastian kept a sharp look out for anyone trying to sneak up on the airship, though it was Jacon had had the sharper eyes. Spying some shadowy figures moving into cover behind some nearby crates, Jacob brought his pistols up and hot lead filled the air as the figures opened up with a volley of rifle fire. Despite standing right out in the open, Jacob fared far better than the figures who'd fired upon him be felling them in a blaze of gunfire.

Meanwhile, Alex and Herbert arrived on the scene and found themselves behind the gang. The good doctor, armed with a trusty SMG, proceeded to mow down half the gang in surge of energy. Unnoticed, Alex managed to stalk up to one of the gang members and introduce the man to the business end of Alex's gun cane. Then the heavy machine guns of the airship were brought into play and decimated the gang, forcing most of the survivors to flee. The gang leader, Pete Wisdom, gave his position by shouting at the fleeing remnants of his gang. Sebastian, homing in like a bat on its prey, wasted no time and fell Pete Wisdom with a single shot to the head.

Alex and Jacob hurried over and found Pete to be still alive, only just, though it wouldn't be for long as Alex had reloaded his gun cane and took the chance of taking out an enemy. As the crew took stock of the aftermath of the very one-sided battle, police sirens wailed in the distance. Presenting his bounty hunter warrant and credentials, Jacob managed to convince the constables that the battle was fought in self-defence. Rather fortunate as the gang had only recently had bounties placed on them for sky piracy,  uncanny timing one might say. The crew also got Ardent Gowan's goods back, the paperwork now 'fully resolved'.

Finally the crew found out that Andrei's latest job was a train heist whilst Jacob found some juicy bounties to go after.

It proved to be another fun session, the highlight had to be the Burning Knives rolling 18 on an unskilled Stealth roll without the aid of a Wild Die. Though, as mentioned above, both Herbert and Jacob were able to spot them.

Sebastian also got a chance to shine, dropping an enemy Wild Card with a single shot.

Interesting to see where the players go from here since they have the train job from Andrei or the bounties Jacob managed to find.
Posted by Stephen 'Stormwell' Hughes at 06:00