So after a lunchtime shoot-out in a country pub, the crew prepared themselves for an assault on Spitsworth Manor. Expecting a recreation of the Forlorn Hope or the Charge of the Light Brigade, almost nobody could've expected the explosive finale. It was a night to remember, one filled with ferocious battle, fiery destruction and the fall of many a great name. 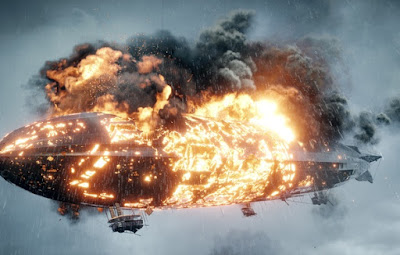 Having previously scouted the manor grounds and spotted a company of guards present, thus learning the grim odds against them, the crew decided to go all out. The limo they'd acquired from Edmund Spitsworth was packed with explosives and driven towards the main gates with Gren at the wheel, though he managed to bail out but rolled badly and was left momentarily winded. The Rolls-Royce missile on four wheels hurtled towards the heavy gates,collided with them and then exploded taking one of the guards by the gate with it. Gren, now recovered but with a few aching bruises, sniped the other guard before Jacob ran through the gate before sliding along the wet grass mowing down guards with his pair of machine pistols.

Meanwhile, Sebastian and Herbert flew in on the latter's young dragonhawk to provide some aerial support before the crew's airship arrived. It was at this point that the crew discovered the manor was defended by anti-aircraft guns, primarily when one of the guns mysteriously exploded and killed its crew when it tried shooting at the dragonhawk. Sebastian then spotted a couple more AA guns and took one of them out by sniping its pile of ammo. Some of the ratings from the crew's airship then assaulted the main courtyard, only to be cut down to a man by the guards...leaving a chief petty officer called Mick McGuire as the last man standing and with the luck of the devil.

Being the coward that he was, Reginald used his gizmos to turn invisible and ran away.

The third and final AA gun got a shot off that injured the dragonhawk, though Herbert and Sebastian managed to stay on and keep the giant bird in the air. Sebastian sniped the gunner whilst Jacob and Gren took out the rest of the gun's crew in order to capture the gun. The AA gun was turned round to point at the house, the intention to blast a hole in the wall rather than trying to storm any of the doors. Also, the crew's airship arrived...

...only for an explosive fireball to rip through its innards and blast the aero-vessel apart. With the death groan of some great levitation of the sky, the flaming wreckage carried forward and downward towards the manor. With a thundering crash, the wrecked airship smashed into the building and completely destroyed it along with the crew's plans. It was then everyone realized that nobody had seen Alex since leaving the pub earlier and, knowing his character, put two and two together.

Gren and Jacob vowed to hunt down Alex and have their vengeance on him, the rest decided to scatter to the four winds and strike their own paths.

"Ah, I've been expecting you gentlemen." Andrei smiled as the two men entered his study. "You come seeking information as to the current whereabouts of your...former...compatriot Mr Stondheim haven't you?"

"I thought as much." Replied the Tylander keeper of secrets. "But, I must ask, what do you offer by way of payment?"

He had alot of time to think, the sole walker down a lonely country lane with no real destination in mind. He had his pension from the Service after being demobbed, plus he'd put aside some of his wages from the logging company and then the crew. This was cash that he could draw upon for the essentials; food in his belly, a room for the night, new clothes and perhaps a ticket to wherever he wished. His real asset was his winnings from card games amongst the crew and some of the casino tables. Yes, it would be more than enough to buy himself an airship and get together a crew to fly it.

"Life as a free trader, Captain McGuire." Muttered Mick before he smiled. "I like the sound of that."

It was a case that would puzzle the Commonwealth Garda, a crime had been committed...two in fact...but the Powers That Be were quite happy for the matter to be brushed under the rug. A lord, long thought to be a respectable member of the community, turned out to be an infamous crime boss who's influence spread far and wide before he was found dead. Understandably, the Establishment wanted the matter kept quiet and so it was. Though what was curious was that one of the man's offices had been broken into and quite clearly a pair of pistols had been stolen, yet the Garda was told in no uncertain terms that this thief never ever happened.

A short while later, the offices in question burned down.

Short while after that, a certain Elisa Spitsworth received a letter. A smile spread across her face as she read it and a hand rested on her belly.

They say in the Alyeskan Outlands there is a man, a supposed doctor, who rides a dragonhawk like a Windryder but is not of those people. He travels the wilderness from settlement to settlement, lending his skills as a medicine man before moving on again. Though they say he lacks in wisdom and his mouth, occasionally, has a habit of running off without him.

If you walk the streets of Lindun, or any other town or city in the Home Isles, you'll come across the Glimmer Man. He wears threadbare clothes, but holds with a manner that betrays an aristocratic background. Usually found on street corners trying to entertain passer-bys with displays of his gizmos cobbled together from pieces of scrap so that he could beg for the odd coin or two.

A figure, with quite clearly a gun in their hand, stepped into the alley ahead of him whilst another blocked the way behind him. The first figure spoke, a familiar voice echoing across the years and laden with dread. "Hello Alex...remember us?"

It was quite clear that at least one person was going to be leaving the alley in a wooden box.

What, THAT was most certainly an explosive finale.

Despite all the characters surviving, it was decided by the group that it was a good enough moment to finish the campaign there. Everyone seemed to have enjoyed it and its almost a shame that its over, especially now I have to think extra hard if I wish to continue weekly blog posts. Though my next few posts are likely to be the various plotlines that I wanted to do but didn't get to.

Though a Frozen Skies game may be run on the RPG site SavageRifts at some point in the future.
Posted by Stephen 'Stormwell' Hughes at 06:00