Frozen Skies Episode 20: Two Pints of Cider and a SMG

Previously, the crew put their plan into action to restore Reginald to his family's good graces...or at least to gain unrestricted access to the Spitsworth family wealth. This week was the next stage of the plan, one that concerned Reginald's sister Elisa. The hope was to convince her to come along and stage a kidnapping and then rescue by Reginald.As it turned out, things really go to plan nor as expected. 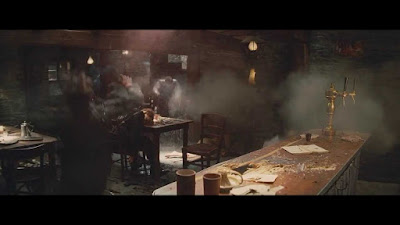 A Little Softening Up

Jacob continued his 'torture' of Reginald and Edmund to help authenticity to the whole kidnapping plan. When asked who was the more valuable one both brothers agreed that it was Edmund, strangely Reginald was quicker off the mark in saying this. After Reginald was dragged from the room, Jacob then leaned on Edmund to tell him what the Spitsworth brother knew. Edmund spilled his guys, though figuratively rather than literally, and told Jacob everything he knew about the Spitsworth family's dealings.

Jacob then divulged the information with Alex whilst Sebastian made preparations to meet Elisa.

To The Manor Born

Sebastian had arranged to meet up with Elisa at the same village inn where the crew had been put up after their lodgings on the Spitsworth estate mysteriously burned down. New guy Gren and Herbert went along as Sebastian's bodyguards whilst Jacob and Alex sought out a local street gang to hire. The idea was that Jacon would lead the gang to 'kidnap' Elisa and Sebastian's bodyguards would pretend to put up a fight.

Only Elisa wasn't at the inn when the trio arrived.

Puzzled, the trio sat down at a table in the barroom with only a couple of farm workers and the bartender for company. Sebastian wracked his mind to make sure he had the right information and have the right information to Elisa. Just then Gren's Danger Sense kicks off and a dozen well armed and well equipped mercs step out from where they'd been hiding. The lead merc announced that they'd been waiting for the characters and that "His Lordship wants a word with ye."

So outnumbered four-to-one by a bunch of SMG toting mercs and with their escape route cut off, the trio meekly surrendered and agreed to go meet His Lordship....opened fire on the mercs.

Gren had spotted that a ceiling beam was propped up by a wooden post in the middle of the room and shouted to Sebastian to shoot it out. Herbert, meanwhile, kicked over one of the tables to provide some cover for the trio as Sebastian blew away the post with his guns before being yanked back into by Gren. Then Gren opened fire on the mercs as the ceiling made disturbing noises and began to sag as dust and bits of plaster started trickling down. The mercs responded with a barrage of around a dozen SMGs, though strangely did little more than perhaps nick Gren and Sebastian with splinters from the table.

With a resounding crash the ceiling gave way and came down, quickly filling the room with a cloud of dust that impeded the shooting of those present but having no other real effect. Gren got a shot off before Jacob, Alex and one of the street gang goons arrived. Jacob fired blindly from round the door before Alex walked in and called for a ceasefire, stalling the mercs along enough for him to move into cover behind the bar and for the dust cloud to settle. Alex then abruptly ended the ceasefire by shooting his gun cane point blank range at the nearest merc before ducking down behind the bar, others had taken advantage of the ceasefire to move into better positions before the gunfight resumed.

The rest of the mercs were then whittled down in short order with the crew taking nothing more than flesh wounds if that. They then looted the mercs, letting the street gang take their pickings in lieu of payment before the pub was put to the torch. The crew radically changed their plan and decided to do an all-out assault on Spitsworth Manor, but had the foresight to scout it out first. Good thing as it turned out that the Manor was guarded by a company of mercs, requiring a revision of the crew's planned assault.

I'd figured there was going to be a fight this session, but thought the players would go straight to an assault on Spitsworth Manor. Then again I was expecting the players to agree to go meet Lord Charleston rather than fight, though should I really be that surprised?

Adventure Cards proved to be extremely useful for the players as the cards allowed them to negate or completely ignore damage as one of the characters almost ended up dying twice. Regardless the fight proved useful for me as it felt like a challenge for the characters and encouraged them to take advantage of stuff like cover, etc.

Next session looks like it could potentially be the last depending on what the characters do and how lucky they end up being.
Posted by Stephen 'Stormwell' Hughes at 06:00