This week's Wednesday post looks at the world map of Darmonica, or at least a very rough draft of it.

Presently there are three very rough maps as to what Darmonica looks like, they're more like a puzzle than anything else to give a rough idea of how everything fits in. So keep in mind that the following 'maps' are meant to rough designs as different ideas are tried out.

Basic idea behind this one is that the 'core' of the setting is focused round an ocean, though on side is the 'homelands' and on the other is the 'colonies'. This would allow the setting to be built up over time and expanded as other areas are explored. 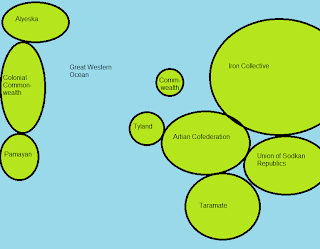 With this idea the 'core' region is centered on a single continent, though I feel there are issues explaining how some countries got colonies on the other side of the landmass, etc. 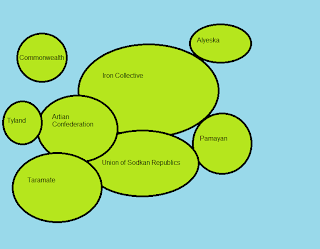 This idea is make the 'core region' of the setting an actual region like Europe, etc. 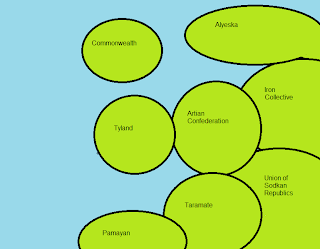 Out of all three maps I'm presently favouring the first and third ones the most, though I'd like some feedback on what people's thoughts are on this.


So which one you like the most? Do you have suggestions of your own?
Posted by Stephen 'Stormwell' Hughes at 14:24