Couple of months back I was going over ideas for various setting ideas other than Frozen Skies, this included a dark fantasy setting called Darkwatch. I'm still hashing out ideas and getting details set down in concrete. Part of this is finally naming and getting down some details on the city thats the core of the setting. 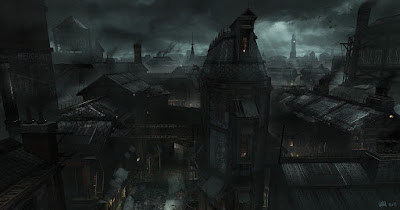 As stated previously, the city of Ravenscroft was occupied by a dark force before being liberated and so the setting covers the city in the aftermath of battle. Parts of the city lies in ruins and it hasn't recovered its pre-occupation population. What citizens there are make a living by shifting through the derbies of battle looking for their next meal...or become a meal for something that lurks in the shadows of the city.

Ravenscroft is effectively under the rule of a military governor, the Lord Provost, and martial law as it has become a major staging point for supplies and troops destined for other fronts. So its garrison of troops must act as the city's watch in addition to their normally military duties, though they are hampered by the demands of the fighting happening elsewhere. So Ravenscroft's garrison is made up of those unfit to fight on the front line be it due to age, injuries or scars of a different type.

It isn't entirely clear where the 'Darkwatch' name originated from, but it has become the de facto name of Ravenscroft's garrison. As all able-bodied men are required for the fighting elsewhere, the Darkwatch has to make do with the derbies of battle. Struggling to meet its manpower needs, the Darkwatch has had to accept those unfit for service, those with dubious pasts and even women into its ranks.

The main job of the Darkwatch is to ensure the unhindered passage of supplies, arms and soldiers to other fronts. It also has the task of keeping law and order among what exists of the city's civilian population and root out agents of the dark forces that had recently occupied the city. It is a thankless task with little in the way of reward other than board, slightly better rations and a handful of coins each week.

As each district of Ravenscroft is reclaimed and secured, a suitable building gets commandeered as a district watch house to act as the man base of operations for the Darkwatch in a given district. Additional watch posts will be established, though are only manned on a part time basis and function more as rest stops for the Darkwatch.

There are many districts that make up the city of Ravenscroft, here are just a few.

Aldwell - An impoverished district prior to the occupation, though much of it was levelled during the fighting. Gives way to the Welgate district to the south with the Rugate district to the east and separated from the Rowmarket district to the west by the Aldbrook stream. Its northern boundary is industrial waterfront on the River Morr, a mighty river that bisects the city.

Blackhall - Location of the Palace of Blackhall, seat of the Lord of Ravenscroft prior to the city's occupation. Largely destroyed by an explosion of dark magic when the city was liberated, though the fires are still smouldering.

Rowmarket - Featured the city's biggest market of the same name and a range of commercial interests, now serves as the seat of the Lord Provost of Ravenscroft and the HQ of the Darkwatch.

Rudgate - Home to many warehouses and wharfs of the city's docks.

Welgate - District on the southern side of Ravenscroft, also where the Aldbrook enters the city on its way to feed into the River Morr. It was a slightly better off district compared to Aldwell, but suffered as equally bad during the fighting. Now home to the tent cities of the armies staging through the city.
Posted by Stephen 'Stormwell' Hughes at 06:30

Email ThisBlogThis!Share to TwitterShare to FacebookShare to Pinterest
Labels: Darkwatch