Last time, the crew had an encounter with the Shackleton Detective Agency who had a bounty warrant for one of the crew. They had also had made some serious plans about their future, achieving the long-term goal of one of the characters. This session saw the Shackletons being dealt with and the crew's own paranoia driving events and resulting in player vs player combat. 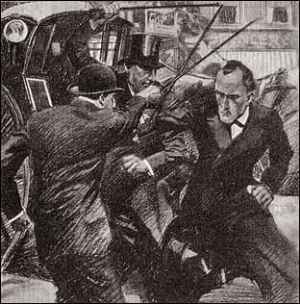 Having already agreed to meet the Shackletons at one of the hotels in Gravenburgh, the crew set about making plans and preparations. Reginald set about crafting some gadgets aided by Herbert, just a few items that may or may not come in useful. Tag spoke to Sebastian about possible reasons why there may be a bounty on him, Sebastian mentioned that he was part of a vigilante group in his earlier years that ran afoul of somebody who had the law in their pocket. Though Reginald did reveal that he knew the Shackleton's employer, a certain Lord Bellington, who was involved in his father's business dealings (but didn't mention one critical fact).

Following day the crew set out for the hotel to meet the Shackletons in order to resolve matters, though Alex split off from the group to complete his own task. They also brought along most of the ratings from the airship, leaving the crew chief Maguire and a couple of hands to guard the airship. At the hotel only Tag and Sebastian went inside to meet the Shackletons whilst the rest of the crew remained nearby, though there was only one Shackleton waiting for them in the hotel's saloon. The Shackleton identified himself by presenting a Shackleton Detective badge and produced the warrant when Tag asked to see it. Checking the name on the warrant, Tag explained that the person mentioned in the bounty was dead and that he had a death certificate to prove it (Alex had actually created Sebastian a new identity some time back). A letter also was handed to the detective, unaware that it was a fake letter crafted by Alex to sucker the Shackletons onto a gang he'd had some recent bother with.

So the Shackleton, Tag and Sebastain (or whatever name he was now using) went and got the death certificate officially confirmed. The detective then got his warrant voided at a local police station, though took a copy of the death certificate as 'proof' for his employer. Before parting ways, the detective revealed some key information; Lord Bellington was to be Reginald's future brother-in-law and wasn't happy to find that his bride-to-be had been sallied by another man (Sebastian). His Lordship wanted Sebastian brought back to the Home Isles alive, so that he could challenge him to a duel. The Shackleton also said that the crew could expect to be let alone by the Shackletons, but couldn't vouch for his employer.

The crew met up again, though Reginald went round town soon afterwards to do some shopping for various pieces. Top of his list was radio parts to create tracking beacons for the crew. Tag meanwhile spoke to Alex and used a couple of his past aliases, prompting a response from the self-styled money man and con artist. Tag then went onto explain how he'd met a broker of secrets called Andrei, but warned Alex against trying anything rash. There was an uneasy agreement made that they would wait until they'd learned more about Andrei before moving against him, but in the meantime they would take any work he offered.

With their business in Gravenburgh concluded for the time being, the crew set off with both the Waylander and the now repaired air hulk bound for Bowerstead Post. They intended to hand the Waylander back over to the logging company, then go forwards flying their recently acquired airship which had been christened the Stormrider (strangely fitting since it had been rescued from a storm). They also met up with Ardan Gowan, who was less than happy to see them. He wasn't happy because the smuggling job he'd hired them to do went south and they didn't deliver all the goods, so he only paid them half of what was promised. He also wasn't happy that a dragonhawk egg they'd left him had hatched and he now had to deal with a young dragonhawk that was the size of a horse. Alex remembered he'd left another egg in his apartment at Bowerstead and hurried off to check it, thankfully it hadn't hatched and so they sell had an egg to sell.

Herbert and Reginald headed over to a makeshift shooting range at Bowestead Post to practice their skill at arms. Reginald in particular wanted to get some practice using a glimmer gun he'd picked up, though first time he tried firing it the Ancient Terran weapon exploded and injured both him and the good doctor. Sebastain had been observing the proceedings and Alex got wind of the incident, joining the dots that Reginald had used glimmer rock in the tracking beacons and so had technically planted explosives on everyone. After the duo had dealt with their wounds, Reginald found himself being confronted by Alex about the 'explosives'. Things ended up getting a bit heated and Reginald deployed his two mechanical bodyguards against both Alex and Herbert, though the automatons got scrapped by Alex and Sebastian in short order. Sebastian had also rounded up some of the crew to grapple and thus restrain the combatants in an attempt to calm things down.

It was at this point that Tag rocked up with a 50-calibre rifle and stunned everyone into silence. After giving everyone an ear-bashing for brawling with one another, he asked what had happened before giving Reginald another ear-bashing and introducing the butt of the rifle to his head thus knocking him out. Everyone got dismissed and Herbert dragged Reginald to the Stormrider's infirmary to tend to the additional wounds the tinkerer had suffered in the brawl, though a 'mishap' saw Reginald gain a facial scar. Tag set about getting the crew ready to complete Andrei's job.

In the airship's cargo hold, a certain egg started shaking as cracks appeared....

Well, that was unexpected.

Everyone had turned up for this session expecting a big fight with the Shackletons, though neither side were actually willing to fight unless the other pushed things. Regardless, it probably won't be the last that the crew hear of the Shackletons or Lord Bellington.

That said, combat still ended up happening...just in a way nobody expected. It ended up being quite hilarious as people still got to play Adventure Cards they'd picked as part of their plans for the expected big fight. Shaking in their Boots had been taken by Tag with the intention of using against the Shackletons, but proved to be a godsend when the crew brawl broke out. Likewise, Sebastian used Angry Mob to summon some of the airship ratings to restrain Herbert, Reginald and Sebastian. Reginald's scar was the result of Herbert using the Hot Iron and Whiskey card to heal his wounds from the brawl.

It is interesting to note that Herbert's player has decided to take the Beast Master Edge as his next Advance, he wants to harness the dragonhawk from the second egg. So I'm having to figure out the stats for a young dragonhawk and how long it takes to grow and mature. Players like making things easy for their GMs don't they?

Lastly, Alex's letter to the Shackletons could potentially spell trouble for the crew later on.
Posted by Stephen 'Stormwell' Hughes at 06:00