Last time on Adventures of the Waylander, the crew had dealt with the military court martial of ship's doctor Herbert Schilling. They had also come across an air hulk in the ocean crossing on their return back to Alyeska, managing to successfully tow the derelict airship back to port. This session saw the tying up of loose ends and making decisions that will affect the crew's future. 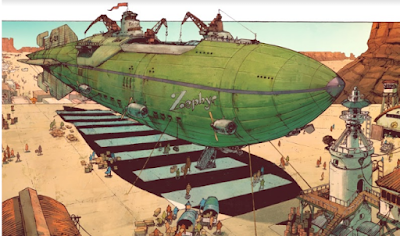 Back to the 'Burgh

After concluding Herbert's court martial, and with the doctor getting an honourable discharge, the crew set course for Gravenburgh once more. This was to see how the repairs were progressing on the air hulk, plus the chance for individual members of the crew to take care of business. Herbert had to find an army pay office to collect ten months worth of back-pay from his military service, Alex had to visit the local Board of Trade office to deal with some paperwork whilst Tag attended to some other matters.

The vast majority of the crew (Alex, Herbert and Reginald) headed out together, first to the army pay office and then the Board of Trade office. Tag detailed Sebastian to keep an eye on Alex, so he tried trailing the group and absolutely failed to be discreet and got spotted by the group. Additionally, Sebastian failed to spot that he himself was being followed by a pair of men in greatcoats and wide-brim hats. Alex, on the other hand, did spot the men and managed to loop round through some alleyways to get behind them. When the others reached the army pay office, Alex tried causing a scene by pickpocketing a random passer-by and placed their wallet on one of the men before alerting the crowd to a 'thief'.

The ruckus drew the attention of the soldiers and a military provost was sent out to question the man, though the man was allowed to go after presenting some paperwork to the provost. When Herbert asked about it, all he got told was that the man had presented a warrant. Alex, meanwhile, tried chasing after the second man but lost him in the alleyways. With the two men remaining a mystery for the time being, the group carried on to the Board of Trade office where Alex registered a company and the group headed back to the airship.

Tag went and met up with the broker of secrets Andrei, finally agreeing to the terms and method of selling the location of the glimmer rock deposit as an auction with royalties. Andrei had also found a buyer for the dragonhawk egg the crew had stashed at Bowerstead Post, in addition to a job. The job was basically an aerial heist; an airship was due in Alyeska in the next few days carrying highly valuable jewellery but the crew will have to board said airship. Andrei gave Tag the relevant details before the latter left.

When the crew arrived back at the Waylander, they spotted a greatcoat wearing man with a wide-brim hat speaking to one of the airfield workers. Sebastian was sharp-eyed enough to spot coin being exchanged, though it wasn't clear exactly what for. Tag was informed about the men who'd been trailing the crew and the incident with the airfield worker, whom the crew decided to track down. The worker was found in a nearby pub with his workmates enjoying a celebratory drink for he'd received a bonus equal to a week's wages. Tag bought a drink for everyone present before the crew spoke to the worker, who revealed he'd been asked about what airships had arrived from the Home Isles recently. On the way back to their airship, the crew encountered another of the strange men without incident and some of the airship's ratings reported they'd been asked questions about the airship.

Back onboard the Waylander, Tag called a meeting. It was revealed that Tag and Alex had been busy setting things up to form their own company, effectively end their contract with the logging company and operate solely as freelancers. It would involve handing the Waylander back to the logging company and then operate the air hulk they'd recovered, plus taking on jobs that were questionable on how legal they actually were. Oh and the crew would have to sign contracts and be working for Tag, though everyone agreed to do so. The crew's next few moves and the aerial heist job were discussed.

Following day the crew headed back into town, Sebastian went with Tag this time as supplies were gathered for the trip to Bowerstead Post. Just as he'd hoped, Tag spotted one of the greatcoated men following them. Tag went over to the man and demanded what he was up to, turned out the guy was part of a team of bounty hunters. They had a warrant for Sebastian to be captured alive and taken back to the Home Isles, it also appeared that some nobleman had placed the bounty. Sebastian didn't recognise the nobelman's name, though the bounty hunter said he was happy to come to an agreement that avoided any bloodshed. Tag agreed to meet the bounty hunters at the hotel where the bounty hunters claimed they were staying.

Both sides then went their separate ways and started planning...

It was a bit ironic with the bounty hunters, Sebastian has Wanted as a minor Hindrance and his player and Tag's were discussing said Hindrance with the view of developing some plot relating to it. The bounty was bit of a surprise for both, though unrelated to Sebastian's Hindrance as me and his player have now hashed something out. The expectation for the next session is some combat, though I suspect Tag's player to pull off some trick as he tends to prefer role-playing over combat. Though it likely that it'll come down to whoever has the most bases covered.

The players deciding to go a more freelancer route was half-expected, I'd known Tag's player had been working towards his own enterprise for some time. Coming across the air hulk by chance was probably the incentive needed to shift up a gear, but it is something I feel is a natural progression as part of the campaign as the players have been working towards getting 'their' own airship. The air hulk will have to be kitted out and I need to figure out stats.

Whilst discussing their plans for the future, the players did discuss Broken Spires and the 'supposed' military campaign against it. They decided to aid Broken Spires, chiefly by tipping off certain parties in the pirate haven. Aiding Broken Spires does potentially mean risks to the crew's kickbacks from the glimmer rock deposit that they've now finally sold the location of.

Oh, and plot I'd been hoping would be triggered has now finally been triggered!
Posted by Stephen 'Stormwell' Hughes at 06:30